Peptides and proteins are known to have great therapeutic potentials against several diseases and syndromes. They are an imperative part of the pharmaceutical industry. Nowadays, numerous proteins are being studied as effective therapeutics against a variety of diseases.

As protein-engineering technologies and regulatory frameworks evolve over time, so do protein therapeutics. Optimized versions of existing therapies can be achieved through better drug targeting as well as enhancing potency and functionality. By understanding the mechanism of action, as well as the structure-function relationship of a protein, rational design and engineering strategies allow modification of its activity and introduction of new activities, leading to customization of existing proteins or the generation of novel therapeutics for specific clinical applications.

The term "biological target" is frequently used in pharmaceutical research to describe the native protein in the body whose activity is modified by a drug resulting in specific effects. Such effects may be a desirable therapeutic effect or an unwanted adverse effect. In this context, the biological target is often referred to as a drug target. The human genome, completely sequenced in 2003, provides a vast source for drug target mining. Any molecule that has implications in the pathogenesis of a disease is a potential target for protein therapeutics. In contrast to small molecule drugs that are able to diffuse across cell membranes, protein therapeutics typically cannot traverse this cellular barrier due to their large size. Therefore, they almost exclusively target cell surface receptors or extracellular molecules. In recent years, researchers have also explored the possibility of directing protein therapeutics to intracellular targets.

Protein therapeutics have three different modes of action based on the pathology of a disease. First, if the disease is caused by unwanted extracellular molecules such as cell metabolites or cell lysate, enzyme therapeutics can degrade these targets. Second, if the disease is caused by a deficiency in certain proteins, such as enzymes, protein therapeutics can be used to replace them and restore an individual’s health. Third, if the disease involves improper immune responses or dysregulated signaling pathways, such as chronic inflammatory diseases, autoimmune diseases, infectious diseases, and cancers, protein therapeutics act as inhibitors or activators of cell surface receptors. Proteins are involved in these modes of actions as a target, an interaction counterpart of the target, or an intermediate of such interactions. Protein therapeutics show advantages such as higher binding selectivity and specificity compared to small molecule drugs; therefore they can target specific steps in disease pathology. 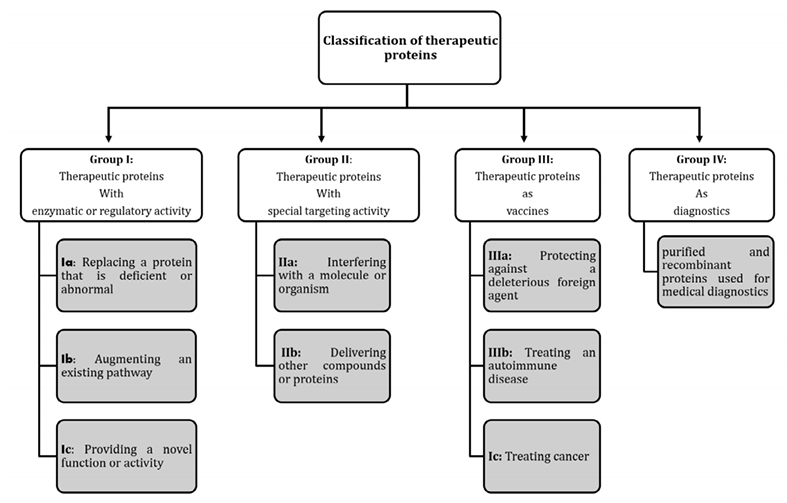 Creative BioMart is devoted to discovery and manufacturing of recombinant proteins, especially proteins that are of therapeutic interests. The quality of our products are well known in both academic and industrial fields. You can search proteins by drug target on our webpage. These proteins are specific for research use and cannot be used as drugs directly. If you have any trouble in finding products, please contact us directly.